The Office for National Statistics (ONS) publishes annual data on drug poisoning and drug misuse deaths. It does not distinguish between prescribed, over-the-counter and illicitly-obtained medicines. The drug misuse figures only include drugs controlled under the Misuse of Drugs Act but, as additional drugs are controlled under the Act, the data is  backdated. The published data only breaks down poisoning (and not drug misuse) deaths by substance so it is data on these poisoning deaths that is presented here.

ONS figures are based on deaths registered (rather than occurring) in a particular calendar year. Many deaths involving poisoning (especially those involving drug misuse) will be investigated by the coroner so may not be registered until some time after they occurred.
Significant rises in 2013 and 2014 are thought to result, in part, from changes in reporting by coroners. 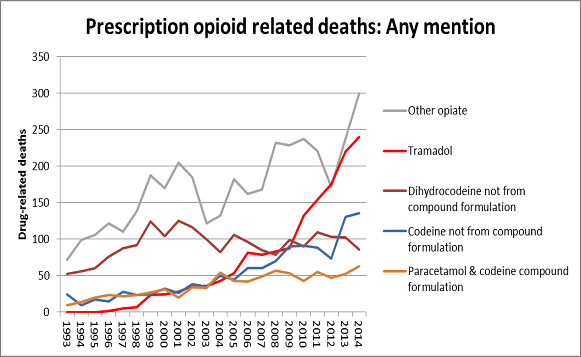 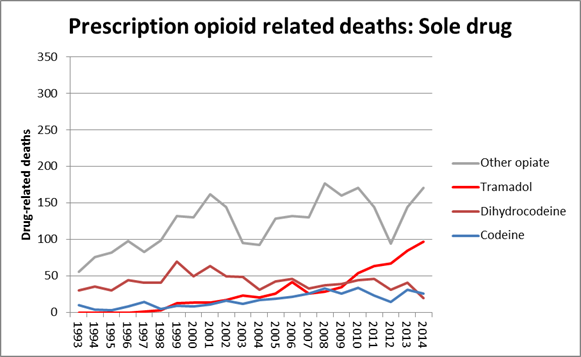 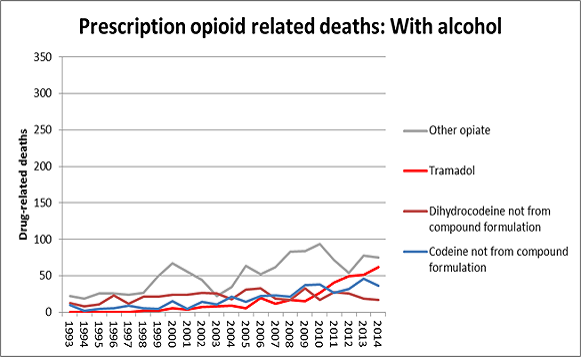 Crime survey for England and Wales

Drug Misuse: Findings from the 2014/15 Crime Survey for England and Wales examines the extent and trends in illicit drug use among a nationally representative sample of 16 to 59 year olds resident in households in England and Wales. In 2014/15, for the first time the survey included questions relating to misuse of prescription painkillers (use of prescription analgesics by those for whom they are not prescribed). Findings include:

– While the misuse of prescription-only painkillers in the last year declined with age (8.0% of 16 to 19 year olds compared with 3.0% of 55 to 59 year olds), the decline was shallower than the decline with age seen for illicit drugs.

One of the key data items collected by the NDTMS system is information on the problem substances that people present to treatment with. NDTMS collects data on an extensive list of medicines that are available on prescription or over the counter. While the national focus of drug treatment has historically been primarily on the illegal drugs evidenced to cause the most harm, local partnerships configure the drug treatment system to best meet local need. It is expected that people who develop problems in relation to prescribed and over the counter medicines are able to access treatment services, in areas where there is evidence of need.

Analysis of NDTMS data gives  a picture of misuse of prescription opioids in patients presenting to drug treatment services. These data are likely to underestimate the prevalence of addiction to medicines as not all individuals who have developed an addiction to prescrib

Crime Survey for England and Wales

Other resources in this section